Genomic Selection is a new plant breeding method that uses statistical modeling to predict how a plant will perform, before it is field-tested. To implement Genomic Selection, first a ‘training population’ is formed that is composed of plant lines covering all of the important material in the breeding program. The training population is then genotyped and phenotyped for all traits of interest to the breeding program. The resulting set of data comprises a full record of the genetic makeup of individuals in the training population, together with detailed phenotypic characteristics for multiple traits on these same lines.

In conventional cassava breeding, new breeding material resulting from a cross is assessed by breeders over several growing seasons and in multiple locations before they select superior clones for the next cycle of germplasm improvement. Cassava is vegetatively propagated, and to obtain sufficient propagules to perform replicated and multi-locational trials for meaningful phenotypic characterization, several cycles of propagation are required.

Cassava breeding cycles, from seedling to multi-location field trials, can take more than five years, limiting the rate of variety improvement and breeders’ ability to respond to new challenges. Shifting from phenotype-based selection to genotype-based selection has the potential to overcome lengthy cassava breeding cycles. Using Genomic Selection, breeders can select superior clones using GEBVs after only two years, which more than doubles the number of breeding cycles feasible.

In addition to shortening the cassava breeding cycle, genomic selection promises to increase the accuracy of selection in cassava breeding. It is not feasible to advance many thousands of cassava seedlings through to adult clonal evaluation. In conventional cassava breeding schemes, breeders thus discard many clones at the seedling stage, a point at which important cassava traits can only be poorly predicted. Thus, valuable clones may be lost. Genomic Selection allows breeders to predict adult performance at the seedling stage. This significantly increases the number of seedlings that can be accurately evaluated.

Genomic Selection promises to revolutionize cassava breeding for the future. Giving breeders the ability to select based on predictions rather than observations will result in much improved genetic gains and efficiency in cassava breeding. This dramatic increase in efficiency will allow cassava breeders to meet the unprecedented demands of crop improvement.

It has also increased capacity for training the next generation of cassava breeders for Africa through training of students and building institution capacity.

Cassavabase.org is an open source database that provides a digital ecosystem to manage breeding programs, including phenotypic and genotypic data, and analysis tools to assist in advancing the breeding cycle. 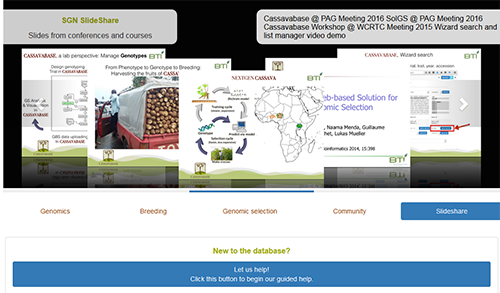